Pruning cycles will depend on quality of nursery stock, growth rate, climate and species and should be shorter in warmer climates. Longer pruning cycles can lead to larger cuts having to be made to correct structural issues. A suggested program would be to prune at planting, year two or three, year five or six, year ten and year fifteen.

Because each cut has the potential to change the growth of the tree, no branch should be removed without a reason. Pruning cuts should be made just outside the branch collar. The branch collar contains trunk or parent branch tissue and should not be damaged or removed.

Begin by determining pruning cycle and dose to develop a permanent canopy. Prioritize trees with structural issues and then temporary vs. permanent branch management. 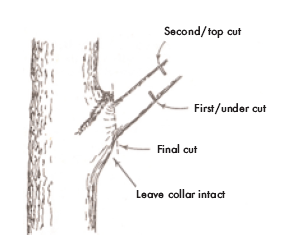 Pruning techniques include the following:

If a large limb is to be removed, its weight should first be reduced. This is done by making an undercut about 12 to 18 inches from the limb’s point of attachment. Make a second cut from the top, directly above or a few inches farther out on the limb. Doing so removes the limb, leaving the 12- to 18-inch stub. Remove the stub by cutting back to the branch collar. This technique reduces the possibility of tearing the bark.

There are many details to consider when pruning in addition to how the tree looks and fits within it’s environment. The short term as well as long term health of the tree should always be considered with each cut.